Coffee Briefing Jan 17- eSIM market to increase by over 200 per cent; Bell Let’s Talk scraps 5 cents per interaction in favour of single donation; TransLink customers can pay for transit using Interac; and more 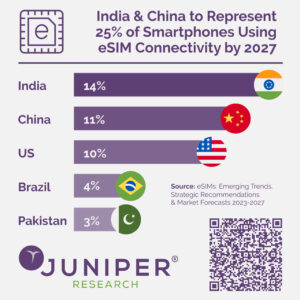 According to a study by Juniper Research, eSIM, the digital SIM that allows a cellular user to activate or switch carriers without physically swapping a physical SIM card, will grow from US$4.7 billion in 2023 to US$16.3 billion by 2027.

The 249 per cent increase will be driven by the adoption of eSIM-enabled consumer devices, such as Apple’s recent release of the eSIM-only iPhone 14, triggering accelerated operator support.

The study also predicted that the total number of smartphones leveraging eSIM connectivity will increase from 986 million in 2023 to 3.5 billion by 2027, with manufacturers such as Google and Samsung developing equivalent eSIM-only Android devices in order to compete with Apple.

India and China will represent 25 per cent of smartphones using eSIM connectivity by 2027.

This year on Bell Let’s Talk Day, the annual campaign by Bell to raise awareness on mental health, the company will scrap the 5 cent donation per interaction that it made in previous years and instead invest C$10 million towards Canadian mental health programs.

The campaign will be held on January 25th and will have a new slogan: “Let’s change this”, to emphasize the increased need for mental health services in Canada and for taking practical actions to influence real change.

“Together with our partners and organizations all around the country, we have helped increase awareness about mental illness and addiction, and Bell Let’s Talk is proud to invest in these organizations all year round.” said Mary Deacon, the chair of Bell Let’s Talk. “But bold action is needed more than ever. Too many Canadians are still struggling with mental health and addiction issues and not getting the care they need. Let’s change this.”

So far, Bell has committed a C$139 million to mental health support and services as part of its C$150 million goal, the company said.

The latest upgrade lets customers board transit by using Interac Debit with physical cards or through smartphone digital wallets. Now, customers can pay for fares more easily, without needing to preload cards or use an in-station Compass Vending Machine.

Regional data from participants of an Interac Canada-wide survey found that a growing number of British Columbians want more convenient contactless payment options for transit, with 66 per cent seeing debit as a convenient way to pay for transit, and 69 per cent saying it would be easier for visitors to pay for transit using their bank card as opposed to tickets, tokens, or passes.

The Entangled Networks team will serve as a beachhead for IonQ in Toronto.

“In acquiring the Entangled Networks assets, IonQ will benefit from not only some of the top experts in quantum architecture, but also from software tools that we intend to use to drive substantial speed-ups in our system performance.” said Peter Chapman, IonQ’s president and chief executive officer. “We are also excited about the opening of IonQ Canada. This expansion will help us better support the thriving quantum computing community in Canada and further our collaborations with IonQ partners and customers.”

Nokia Canada has announced a new “sustainable, modern” office in downtown Toronto, as part of its ongoing efforts to expand its presence in Canada following the company’s recently announced cybersecurity R&D center in Ottawa.

Nokia chose the Queens Quay office building, which is part of the Sugar Wharf redevelopment, which is focused on sustainability with its Class “AAA” LEED and Energy Star certifications. Furthermore, it said, the convenient location of the office provides employees with access to world-class amenities and public transportation, helping to reduce energy consumption and greenhouse gas emissions.

With this announcement, Nokia seeks to also advance its positive employee growth strategy across the country, through a modern, hybrid workspace.

Employees in the new office will have roles in software development, customer service, and sales. The team will be focused on supporting growing demand for Nokia’s 5G, high speed broadband, mission-critical routing, optical, and private wireless solutions, the company says.

“Toronto is a global tech and innovation hub, and I’m so thrilled to see Nokia Canada recognize this as they open an office on our waterfront. Toronto is a vital economic engine in our country, and we are proud to support growth in this sector, encouraging more companies and workers to come to our city.” said Toronto mayor John Tory. “With Nokia Canada’s new office bringing more workers into the downtown core, I look forward to seeing what they accomplish as we recover and grow in the years ahead.”

Ericsson has announced it has set aside SEK 2.3 billion, or the equivalent of US$220 million, to be used in relation to what it described as a “potential resolution” with the U.S. Department of Justice (DOJ) over alleged breaches under its 2019 Deferred Prosecution Agreement.

Consumer and technology trends in a climate-impacted future: Ericsson report

Cyber attackers compromised the website of Ontario’s Liquor Control Board and stole personal information of customers who bought products online, the retailer has acknowledged.

Today, the University of Waterloo announced a 5G and beyond mobile network technology consortium to help develop 5G mobile networks and improve Canada’s security and defence.

Hybrid multi-cloud managed service provider (MSP) Aptum today increased its product offerings significantly, as well as its head count, with the announcement that it has acquired Montreal-based CloudOps, an organization that specializes in open source cloud-native platforms, networking and DevOps.

Staying informed is a constant challenge. There’s so much to do, and so little time. But we have you covered. Grab a coffee and take five while you nibble on these tidbits.

Listen to the latest episode of Hashtag Trending

Listen to the latest episode of Cyber Security Today

If you live in Quebec, or prefer to consume the latest technology news in French, our sister publication Direction Informatique has you covered. Follow them on Twitter as well.