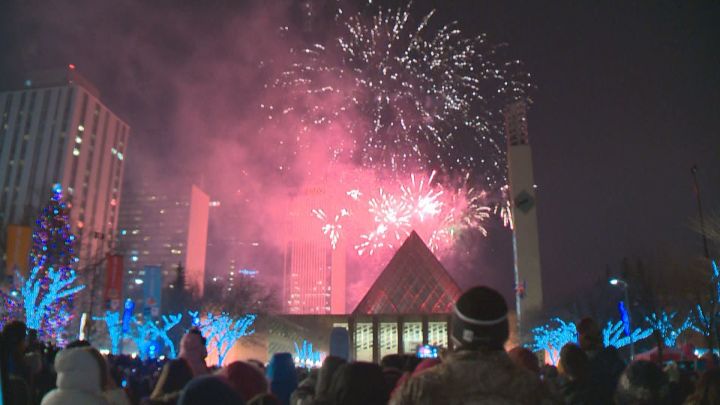 The last time Churchill Square in Edmonton was lit up with New Year’s Eve fireworks was to ring in 2017.

After that, the square was closed for construction and then the COVID-19 pandemic put any sort of celebration on the back-burner. But now with public health restrictions long gone, the party is back on.

“After being on hold from COVID, everybody has had some tough years, so we wanted to make the celebration extra special for people,” said Sarah Ridley with the City of Edmonton. “So it is a big deal for us to welcome Edmontonians back to Churchill Square.

Starting at 6:30 p.m. (on) Dec. 31, the city will host ice skating, music and dance performances. Firepits and food trucks will also be on site and of course there will be fireworks. There will be two shows: one at 8:30 p.m. and the main event at midnight.

“It is absolutely my hope that a lot of people come out and enjoy,” Ridley said.

“However you celebrate the holidays, this is a great way to end 2022.”

The city is estimating between 10,000 to 15,000 people will take in the event, and that is not even counting those that head down the block to the ICE District Plaza for the Edmonton Oilers’ New Year’s Eve bash.

“The Oilers are hosting the Winnipeg Jets for a New Year’s bout, so just like the playoffs you’ll have that tailgate party to kick things off (and) then we’ll go right into the watch party with the game on the big screen,” Kevin Rapanos with the Oilers Entertainment Group said.

“Then, after the game, it will be the New Year’s Eve party.”

“Hopefully we are going to start 2023 with a bang — a big Oilers win and a great night playing some country music into the wee hours of the morning,” Kissel said.

And with businesses also planning big parties, downtown is the place to be.

“We’re expecting to be full, so we are fully booked for reservations already,” said Ray Burton, the general manager of Campio Brewing.

“It’s a really good sign to see people willing to come back out and enjoy a really great night.”

Both the Churchill Square and the ICE District New Year’s Eve parties are free to the public, as is transit starting at 6 p.m. on Dec. 31 until 3 a.m. on Jan. 1 to ensure people have a safe way home.