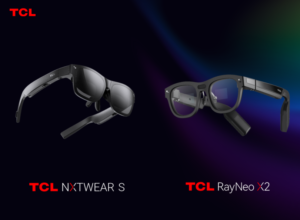 At CES 2023 last week, TCL Electronics announced a series of new devices and upgrades to existing devices ranging from phones to smart wearables. Although specifics are scarce, here’s what we know so far.

Replacing last year’s TCL 30 line of smartphones, the TCL 40 series consists of three models. All use the latest version of TCL’s NXTPAPER display technology, which the company said is 100 per cent brighter than the previous iteration, have long-lasting batteries, and boast 50 megapixel (MP) AI-powered cameras.

The TCL 408 targets the photography buff, with what’s described as a 2-in-1 hyper camera with enhanced macro lens. It also has stereo speakers.

TCL has added a tablet and a 2-in-1 laptop to its line of products incorporating NXTPAPER displays. The TCL NXTPAPER 12 Pro tablet and the TCL BOOK X12 Go laptop each offers a 12.2-inch 2K display that the company says filters more harmful blue light than regular screens, and layers on additional eye protection hardware and software to help reduce eye strain. The tablet includes a TCL E-Pen so users can draw or jot notes with what TCL describes as “paper-like smoothness”. The laptop comes with Windows 11 Home, and claims 14 hour battery life.

A compact tablet with 8-inch HD display rounds out the offerings. The TCL TAB 8 LE has a quad-core processor, LTE connectivity, 5 MP front and rear cameras, and supports expandable MicroSD card storage up to 512 GB.

TCL NXTPAPER 12 Pro is available now for US$499. A 5G version will be available later this year for US$549. TCL BOOK X12 will hit the market later this year; pricing has not yet been announced. The TAB 8 LE goes on sale in the U.S. later this month, starting at US$159; availability elsewhere is unknown at this time.

TCL RayNeo X2 augmented reality (AR) smart glasses will be released to the developer community in “selected regions” by the end of Q1; commercial release has not yet been announced. Powered by the Qualcomm Snapdragon XR2 platform, they will offer a GPS navigation system with simultaneous localization and mapping that showcases nearby landmarks. Bluetooth connectivity enables on-screen notifications and messaging, and AI translation detects and translates conversations, generating subtitles in real time. The glasses also boast a hands-free integrated camera with image stabilization and night mode, and “whisper mode” audio to allow wearers to listen to music without disturbing others.