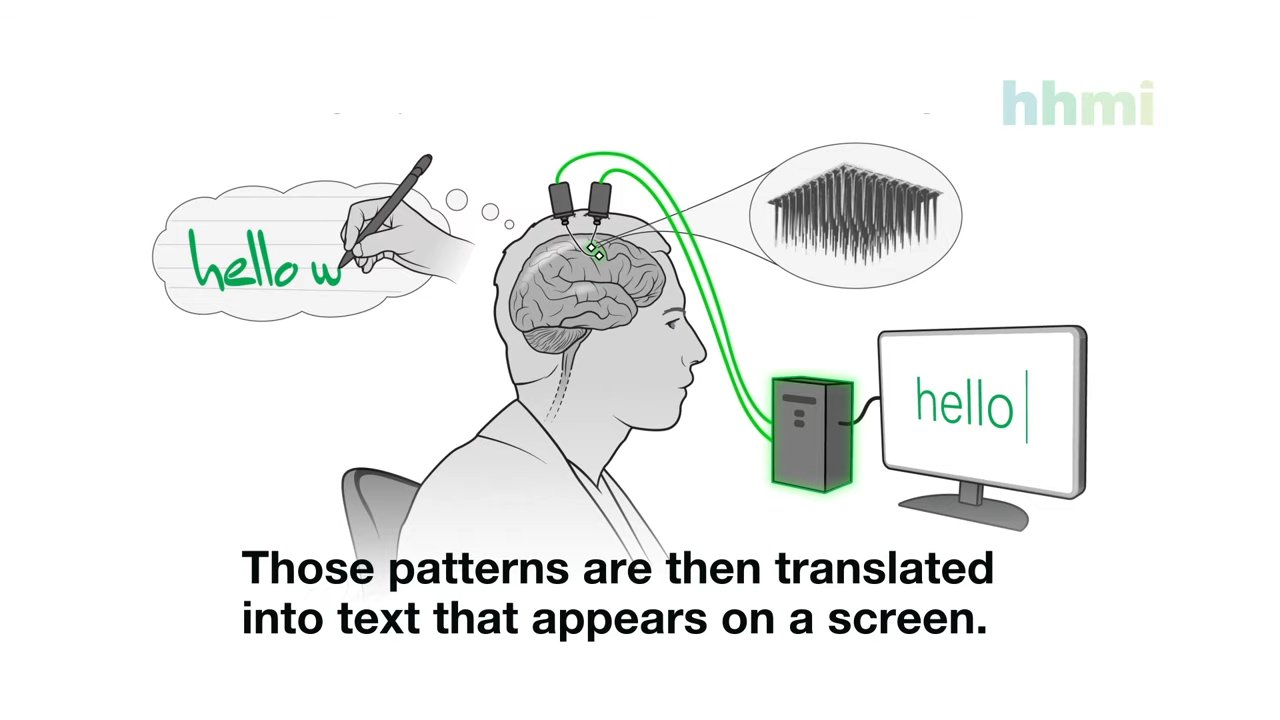 A man paralysed from the neck down was able to communicate his thoughts, thanks to a brain implant system that translated his imagined handwriting into actual text.

The device used is a brain-computer interface (BCI) that uses artificial intelligence (AI) to interpret signals of neural activity generated during handwriting.

Brain-computer interfaces (BCIs) can restore communication to people who have lost the ability to move or speak.

The breakthrough was part of a longstanding research collaboration called BrainGate, started in 2004.

So far, a major focus of BCI research has been on restoring gross motor skills, such as reaching and grasping or point-and-click typing with a computer cursor. This is the first time a more dexterous skill like handwriting was used as an interface for communication.

The patient whose hand was paralysed from a spinal cord injury in 2007, achieved typing speeds of 90 characters per minute with 94.1% raw accuracy online, and greater than 99% accuracy offline with a general-purpose autocorrect.

The 65 year-old-man reportedly achieved this feat by concentrating as if he were writing by effectively thinking about making the letters with an imaginary pen and paper.

‘As he did this, electrodes implanted in his motor cortex recorded signals of his brain activity, which were then interpreted by algorithms running on an external computer, decoding the patient’s imaginary pen trajectories, which mentally traced the 26 letters of the alphabet and some basic punctuation marks,’ reported Nature.

‘This new system uses both the rich neural activity recorded by intracortical electrodes and the power of language models that, when applied to the neurally decoded letters, can create rapid and accurate text,’ said Frank Willett, a neural prosthetics researcher from Stanford University and the first author of the study.

According to researchers, since alphabetical letters differ from one another in shape, the AI can decode the user’s intention more rapidly, compared to other BCI systems.

The current speed and accuracy of this research are almost on par with the typing speed of smartphone users in the man’s age group – which is about 115 characters or 23 words per minute.

The breakthrough shows the promise of communication via a virtual handwriting system to people who have lost virtually all independent physical movement.

‘Our results open a new approach for BCIs and demonstrate the feasibility of accurately decoding rapid, dexterous movements years after paralysis,’ said the researchers.

Despite its potential, this breakthrough technology, is only a proof of concept so far, proven to work with just one participant. It might be a while till it becomes a clinically viable product that can change lives.

The next steps in the research could include training other people to use the interface, expanding the character set to include more symbols, refining the sensitivity of the system, and adding more sophisticated editing tools for the user.

In recent years BCI technology has drawn the attention of tech companies that hope to commercialise it, including Elon Musk’s Neuralink Corp., Kernel and Facebook Inc.


MORE : Neuralink’s monkey can play Pong with its mind – what could a human do?


MORE : The brains of London’s black cabbies are being studied for science