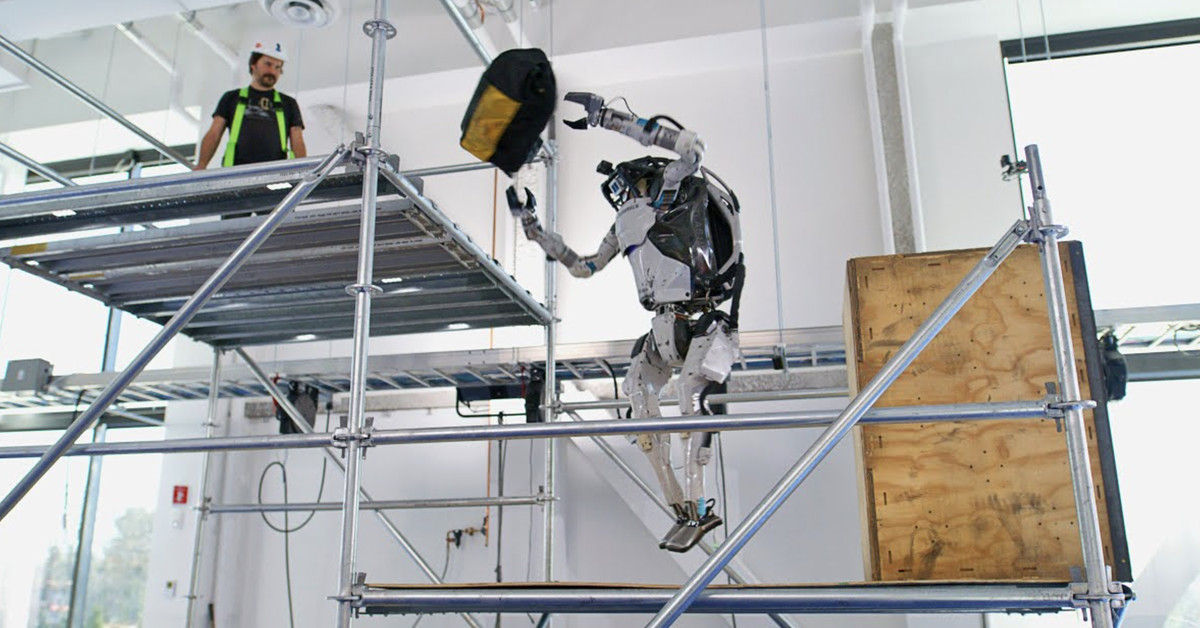 Are bipedal, bimanual robots nearly ready to work alongside humans? Probably not, but we’re getting closer, as Boston Dynamics’ latest marketing videos demonstrate.

Is Boston Dynamics slowly preparing to put its bipedal robots to work?

In a glossy new video, the company has shown off its prototype Atlas robot tossing planks and tool bags around in a fake construction site. In a second, behind-the-scenes video, Boston Dynamics’ team lead on Atlas, Scott Kuindersma, explained that the video is “meant to communicate an expansion of the research we’re doing on Atlas.” As ever, it’s important to note that these videos are rigorously planned and structured, with falls and mistakes edited out. But, as Kuindersma notes, it’s still a change of pace for Atlas.

“We’re not just thinking about how to make the robot move dynamically through its environment, like we did in Parkour and Dance,” said Kuindersma. “Now, we’re starting to put Atlas to work and think about how the robot should be able to perceive and manipulate objects in its environment.”

It’s a notable change in messaging from the Hyundai-owned company, which has never previously emphasized how its bipedal machines could be used in the workplace. Boston Dynamics only has two robots that it actually sells: Stretch and Spot. Stretch is a wheeled machine with a huge arm designed to move boxes in warehouses, while Spot is a four-legged robot mainly used to carry out surveillance and inspection tasks, acting as a remote CCTV camera or mapping construction sites and factories using 3D scanners.

However, as Kuindersma explains in the behind-the-scenes video (above), a bipedal bimanual robot can do all sorts of tasks other robots can’t.

“The dream of humanoids is that they should be able to do all the things that we do, right?” says Kuindersma. “A humanoid robot will be well suited for applications like manufacturing, factory work, constructions — [places] where a humanoid form factor actually fits very well, with its bi-manual nature, its ability to stand upright, move heavy things around, and work in spaces that were traditionally designed for humans to do work in.”

Such robots are not in common use anywhere in the world right now, mostly because their expensive and fragile nature means they’re always worse value for money than human workers. But that dynamic may be slowly changing with improvements in hardware and software. Most notably, Elon Musk has thrown his hat into the robotics ring and is developing Optimus, a bipedal robot Musk claims will one day work in Tesla’s factories. (Musk revealed a prototype of the robot late last year, and experts said that while the company had made speedy progress, it was very far from delivering a breakthrough.)

In a blog post, Atlas control lead Ben Stephens added that we’re still a “long way off” from designed bipedal robots that can reliably work alongside humans. “Manipulation is a broad category, and we still have a lot of work to do,” said Stephens. “But this gives a sneak peek at where the field is going. This is the future of robotics.”

As ever, when parsing marketing materials from companies like Boston Dynamics, it’s important to notice what the company doesn’t say, as well as what it does. In this case, Boston Dynamics hasn’t announced a new product, it’s not saying it’s going to start selling Atlas, and it’s not making predictions about when its bipedal robots might work in factories. For now, we’re just getting something fun to watch. But that’s how Spot started, too.