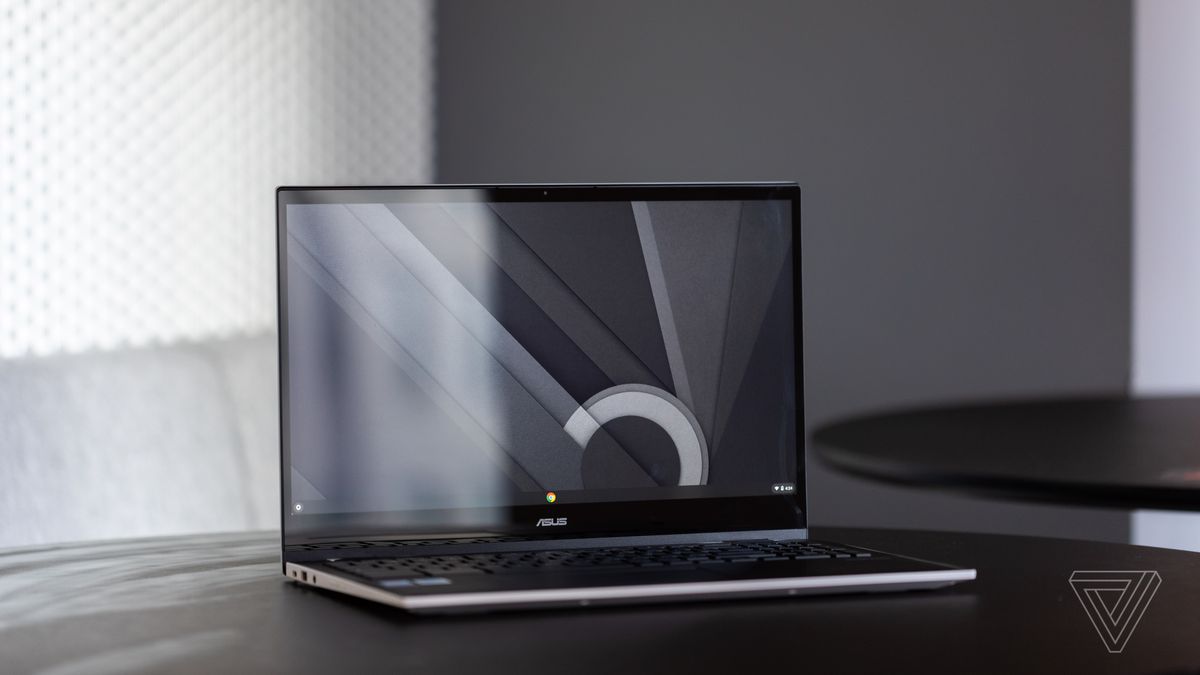 It wasn’t too long ago that the idea of paying $800 for a Chromebook would get you laughed out of a room. In some circles, it still will. I myself have criticized all kinds of Chrome OS devices for being too expensive for what they offer, and I maintain that the $259.99 Chromebook Duet is one of the best bargains in today’s laptop market.

So I opened up my review unit of Asus’ $828 Chromebook CX5 prepared to complain. While that would be a midrange price for a Windows laptop, it’s high for a Chromebook (and most other reviewers have panned the thing for its price). But the CX5 has done a great job of convincing me that my knee-jerk was misplaced — there’s almost nothing, apart from the operating system, separating this laptop from an excellent midrange Windows notebook. Chromebooks have grown up, and so have their prices.

The most unique feature of the CX5, even among recent Windows laptops, is its finish. The chassis is covered in what Asus calls “electro-deposition coating.” I have no idea what that means specifically, but I know I love touching it.

Both the keyboard deck and the lid are almost disconcertingly smooth. “Velvety” is the best descriptor I can come up with. Aside from the Dell XPS 13 (with its somewhat controversial woven-glass texture), there’s not a laptop I’ve reviewed that feels this nice. That smoothness extends to the touchpad as well, which is roomy and does a great job with palm rejection, though it is somewhat stiff such that I sometimes needed two hands to operate it.

Similarly, the build quality is as nice as any Chromebook I’ve used this year and rivals many of the best laptops at this price point. It’s quite sturdy, with no flex in the screen and virtually none in the keyboard deck. The chassis barely picks up any fingerprints, and it came out of being battered around in my backpack without a scratch.

The port selection is reasonable as well, including two USB-C 3.2 Gen 2 ports, an HDMI 2.0, a USB 3.2 Gen 2 Type-A, an audio combo jack, and a microSD slot (no Thunderbolt support, though). The CX5 supports dual-band Wi-Fi 6 and Bluetooth 5.0, and it includes various technologies that are supposed to help stabilize connectivity including a “metamaterial filter” that’s meant to “isolate electromagnetic noise.”

I only have two real complaints about the chassis. The first is the power button — it’s located on the left edge, and I accidentally pressed it several times when holding the device as a tablet. The second, speaking of tablet mode, is the weight. At 4.17 pounds, the CX5 is heavy for a 15-inch Chromebook — it’s very close in weight to the Asus Zephyrus G15 gaming laptop, for context, and over a pound heavier than Samsung’s 15-inch Galaxy Book Pro 360. I’d pick something else if I were looking for a device I could comfortably carry around as a tablet.

Elsewhere, the CX5 works quite well as an entertainment and productivity device. The downward-firing speakers, which are Harmon Kardon certified, have decent percussion and excellent volume, though I did hear a tiny bit of distortion at the top end. The keyboard is fairly comfortable with decent travel and click; it’s also a bit loud, and the numpad is cramped even for my small fingers.

The 1920 x 1080 touchscreen is vivid and kicked back little glare (and the 16:9 aspect ratio, while not ideal, is less of a crime on a 15-inch screen than it would be on a smaller device). The bezels are chunky enough to look a bit old-fashioned, but these are more reasonable to have on a 2-in-1 that you may need to hold from the sides.

Every smart device now requires you to agree to a series of terms and conditions before you can use it — contracts that no one actually reads. It’s impossible for us to read and analyze every single one of these agreements. But we started counting exactly how many times you have to hit “agree” to use devices when we review them since these are agreements most people don’t read and definitely can’t negotiate.

To use the Chromebook Flip CX5, you must agree to:

The following agreements are optional:

That’s two mandatory agreements and six optional ones to use the Chromebook Flip CX5.

And then there’s the performance. My test unit has a Core i5-1135G7 and 16GB of LPDDR4X SDRAM, which are hefty specs for a consumer Chromebook. It blew through whatever I needed it to, and I was often working in over a dozen Chrome tabs alongside a few Android apps, with occasionally a Zoom call or a YouTube video over top. I never felt any heat or noise from the fan inside. I had one issue where running Spotify for long periods of time occasionally made the computer crash, but I’m not sure whether that’s on Spotify or Asus; I’ve asked the latter and will report back if they figure anything out.

Battery life is also reasonable, given the power of the chips inside. I averaged eight hours and 31 minutes of continuous use with the CX5’s screen at medium brightness, and easily broke nine hours on some trials. While that’s not an exceptional result by any stretch, it will allow you to go a full day of use without a charger if your workload is similar to mine. The device also charged quickly enough for a Chromebook, juicing up to 60 percent in 57 minutes.

The CX5 is also available in 14-inch models. You can get a 14-incher with a Core i3 (currently $724.99 on Amazon) and a Core i7 (currently $1,049.99 from Asus). Given how effortlessly the i5 is performing in my testing, I’d be hard-pressed to recommend the latter model to anyone with a Chrome-heavy workload. People who need that kind of power likely know who they are. The i3, on the other hand, may be a decent option for folks who are balking at my test unit’s price and are okay with a smaller screen. An i3 has generally been powerful enough to fly through Chrome OS tasks in my testing. (That unit also has 8GB of RAM, which is still uncommon in lower-tier Chromebooks.)

All of this is to say that the CX5 rivals many Windows laptops at its price point in the areas that matter — it’s not sluggish, flimsy, or cheaply built the way Chromebooks stereotypically have been in years past. The main consideration, if you’re considering the CX5 as a primary driver, is whether Chrome OS will work for you.

I’ve been reviewing Chromebooks for almost two years, and I’ve watched Chrome OS mature before my eyes in that time. It’s grown from an operating system full of glitches and holes to one that doesn’t feel much different from Windows most of the time (especially since the latter just moved its icons to the center of its taskbar).

But there are still a few things that get you — even if you’re someone like me, who works almost entirely in Chrome. Some apps still take a while to resize. Slack is no longer available in app form, so it’s one more thing I have to keep in my bottomless heap of Chrome tabs. Messenger still bombards me every morning with notifications for every message I received over the previous night. While it’s nice that many Android apps have gotten more usable on Chrome OS over the years, there still aren’t too many that I find more useful than their browser counterparts — most of the ones I use are equivalent at best. (And, of course, you can forget about all kinds of desktop apps to which Windows gives you access.)

But for some shoppers, the simplicity and other benefits of Chrome OS outweigh those drawbacks. If that’s you, more power to you.

The elephant in the room to all of this is the CX5’s price: $828.99 is well outside of what most might consider to be Chromebook territory. But that projection is often, in part, based on the assumption that Chromebooks are cheap hardware, and I’d remind people that this price isn’t egregious when it comes to well-built Chromebooks — and I do think this one is well built.

Consider the Pixelbook Go. A Pixelbook Go with identical specs to my test unit is $999. Google’s device is thinner and lighter than the CX5, but it also has a smaller screen, fewer ports, and an older processor, and it doesn’t flip around. It’s not clearly a better purchase for everyone — it’s certainly not $170 better for everyone.

I think if you’re someone who prefers Chrome OS to Windows, and you know that the former will suit your needs, the CX5 isn’t egregiously priced. It’s a solid performer with a unique design — there are legitimate reasons to prefer it over a midrange Windows laptop, regardless of the operating system it’s running.

Most importantly, it loudly and clearly sends the message that various laptop manufacturers have been trying to push over the years: Premium Chromebooks are a thing now. They’re not just a novelty that Google shows off every so often — they’re on shelves, they’re practical, and they’re targeting everyday laptop buyers. Just get ready to pay a bit more.