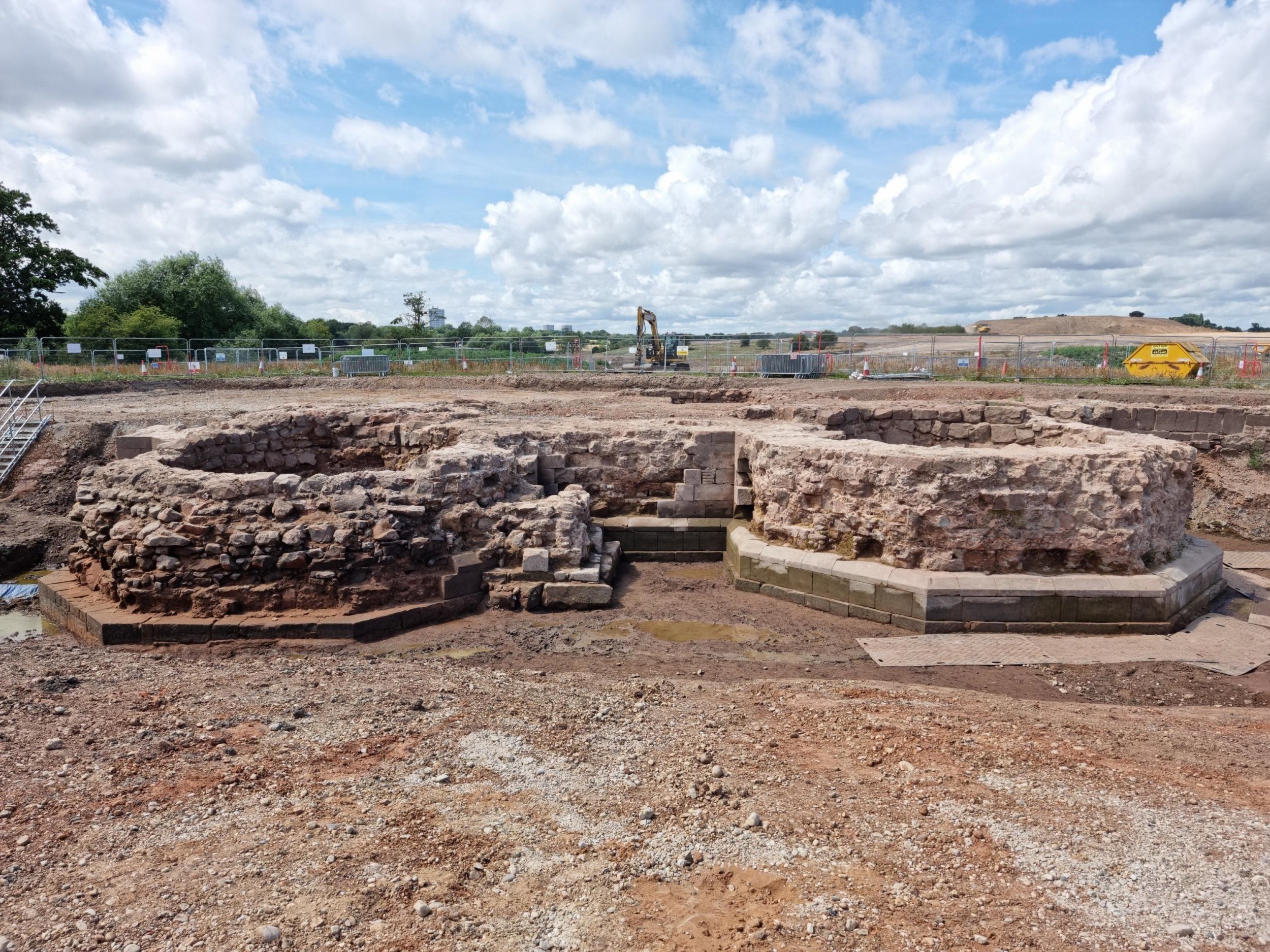 Archaeologists working on the HS2 project believe they’ve uncovered evidence of one of the first battles of the English Civil War.

In fact, this particular 17th century battle is previously unrecorded in the history books.

The astonishing discovery was made along the route of the high-speed railway at the site of Coleshill Manor, in Warwickshire, which was unearthed three years ago.

Experts say 200 pistol and musket ball marks recently found on the remains of the medieval gatehouse could be scars from the first skirmish of the Civil War.

The first recorded battle of the conflict – the Battle of Curdworth Bridge – took place in 1642, and was only a short distance from Coleshill Manor.

The fascinating find also included more than 40 musket balls, excavated from nearby soil, which would have been a moat around the manor house.

Archaeologists say the new discovery is not recorded in any historical records and could provide fresh insight into the war which broke out 380 years ago.

The historical find will feature in the latest episode of the BBC TV series Digging for Britain this weekend.

Professor Alice Roberts, historian and presenter of Digging for Britain, added: ‘The discovery of the medieval gatehouse at Coleshill was quite unexpected.

‘I was amazed at just how much of the monumental stone building, with its two great octagonal towers, had survived below the ground.

‘The front of the gatehouse was pockmarked and had clearly been shot at with muskets – perhaps for target practice – but there’s also an intriguing possibility that we’re looking at evidence of the earliest skirmish of the Civil War.’

The remains of Coleshill Manor and an octagonal moat were first picked up by archaeological teams working on the railway route four years ago.

As the dig progressed, the outline of a massive garden – dating back to the 1600s – was also discovered and dubbed ‘Warwickshire’s answer to Hampton Court’.

It was described as one of the best preserved 16th century gardens ever discovered in Britain.

The team from Wessex Archaeology have now found ‘striking signs’ the heavily fortified manor house came under heavy fire with around 200 impact marks.

Archaeologist Stuart Pierson said: ‘As the excavations at Coleshill for HS2 wrap up, it’s timely to reflect on the extraordinary archaeology we have discovered and recorded.

‘Although we knew there was a manor house at the site, we had no idea that we would uncover such rich and revealing archaeological evidence.

‘From one of the most impressive Elizabethan ornamental gardens in the country to the remains of what could be the first skirmish of the Civil War, these findings – not recorded in historical records – would have been lost to time, had it not been for the expertise and hard work of the team.’

The English Civil War began in August 1642 and was fought between the Royalists who were loyal to King Charles I, and Parliamentarians, known as the Roundheads.

At the time, Coleshill Manor was in the hands of Royalist Simon Digby as the Civil War approached.

The estate was transferred into his name following the execution of its previous owner, Simon De Montford, for Treason.

Experts say Coleshill Manor, next to a bridge over the River Cole, would have been a strategic position that the Roundheads would have wanted to control.

They say it was entirely plausible that a skirmish took place on the way to Curdworth Bridge, especially given the Manor’s strong Royalist connection.

It is also believed that the Roundheads would have passed close to the manor on their way to battle.

Historical records of the Civil War are confined to famous major battles, so details of the exact events will never be known.

But the marks exposed are said to provide a ‘rare glimpse into the impact of war on the lives of those not recorded in the history books’.

Helen Wass, HS2’s head of heritage, said: ‘HS2’s extensive archaeology programme, which has involved hundreds of people, has provided unparalleled insights into the history of Britain and the discoveries at Coleshill Manor are a major part of that.

‘Whilst we may never have all the details of the battle that took place in Coleshill, our investigations help historians weave together the complex pieces of information to increase our understanding of events.

‘Although fieldwork between London and the West Midlands is largely complete, detailed post excavation study will begin shortly and we will continue to share the incredible pieces of our past discovered during this once in a lifetime dig.’

The existence of the gardens and manor house were originally picked up by aerial photography which prompted specialist excavations.

The extent of the gatehouse was unknown before work began, as the only documentation of its existence was a passing mention in 17th century records.

It is thought that it was constructed in the 13th or 14th centuries and went out of use in the 1650s before being demolished in the late 17th century.

The discovery features on Episode 3 of Series 10 of Digging for Britain which airs on BBC2 at 8pm on Sunday 22nd of January.