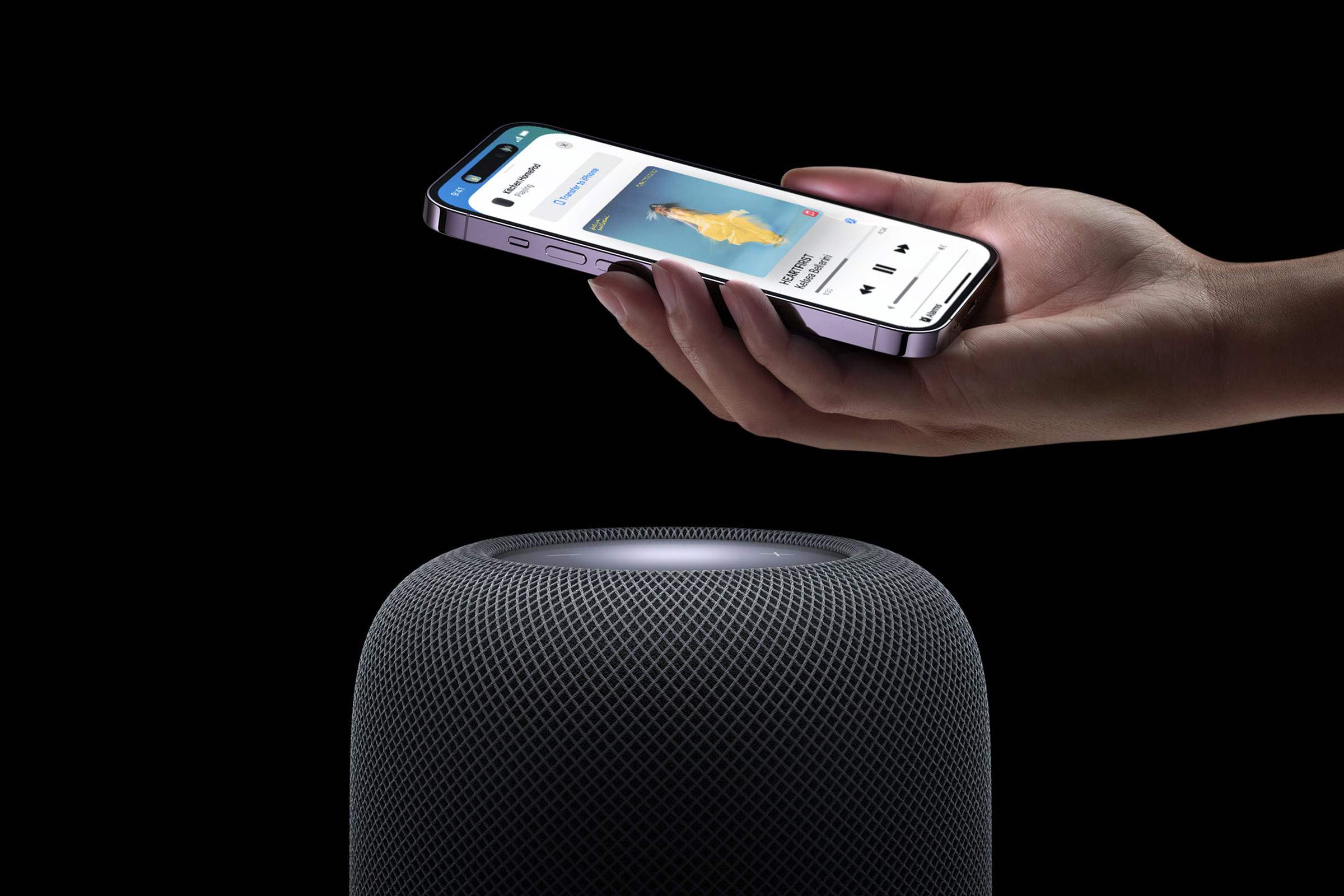 The resurrected smart speaker still has big sound and a very familiar design. We’ll need more listening time to determine whether some internal changes affect more than just the price.

There are some not-insignificant internal differences between the two full-size HomePods: the original contained seven tweeters, while the revamped model drops to five. The microphone array has also been downsized from six mics to four on the 2023 speaker. Presumably, these (along with downgraded Wi-Fi) were cost-cutting decisions that led to the lower $299.99 price. Both include a “high-excursion woofer”; Apple specifies that it measures four inches on the new HomePod. The original had “computational audio” for its automatic room tuning; the second-gen device now features advanced computational audio.

But even if the guts have changed some, the new HomePod still… very much sounded like a HomePod during Apple’s music demos. Like its predecessor, the second-gen speaker exhibited a nice richness, multidirectional room-filling sound, and an emphasis on high-end clarity and detail. When used solo, it’ll likely rank in the upper tier of smart speakers with products like Amazon’s Echo Studio and Sonos speakers. Two of them together during a live version of “Hotel California” by The Eagles sounded splendid. (Apple really loves using “Hotel California” in HomePod demos — we heard it back in 2018 when we got the first HomePod demo, too.) But this was in a controlled demo environment where ear-pleasing results were guaranteed.

Apple didn’t have any side-by-side comparisons of the two HomePod generations, but considering how long the first speaker has been discontinued, I wasn’t surprised. I’m very curious to see if the driver reconfiguration is more obvious when comparing them more directly. Oddly, nowhere in Apple’s press release does the company claim that the new HomePod sounds better than the original. With other products, such as last year’s second-generation AirPods Pro, Apple directly mentioned improvements over the first model.

Based on my first impression, it feels like the company has gone back to the well with the “all-new” HomePod and addressed one big sticking point of the original: it was far too expensive. Now Apple has knocked off $50, but this is still a pricey speaker, and some people will find it hard to justify at $300. You’re left with a product that adds some new software tricks and smart home powers like reading the room temperature / humidity and detecting alarms — but the second-gen HomePod inherently feels same-y. None of the other wishlist items (Bluetooth support, line-in audio, etc.) have been tackled. It’s still ostensibly a fabric-covered vessel for Apple Music, Siri voice interactions, and other branches of the Apple ecosystem.

Siri and HomeKit are in a better place now than they were in 2018, and the new HomePod is fully prepared for the Matter universe. Just like last time, I’m sure a stereo pair will sound great as speakers for an Apple TV. The bigger sound quality (and automatic sound tuning) are the only reasons to go for the full-size HomePod: in terms of software features and smart home functionality, you’re not gaining anything extra over the much less expensive HomePod Mini.

I’m looking forward to testing the new HomePod more thoroughly. But in the meantime, I’m left with the feeling that Apple is recycling an idea just as Sonos is about to reinvent its speakers. I don’t see the same ambition reflected here, but it’s been reported that Apple is exploring much bolder ideas for future speakers. I hope the company takes some chances.

For now, the HomePod’s return seems mostly intended to fill a glaring hole in the product lineup and offer consumers something that’s anything but mini in sound — for a lower price. You’ll be able to give it a listen for yourself on February 3rd.