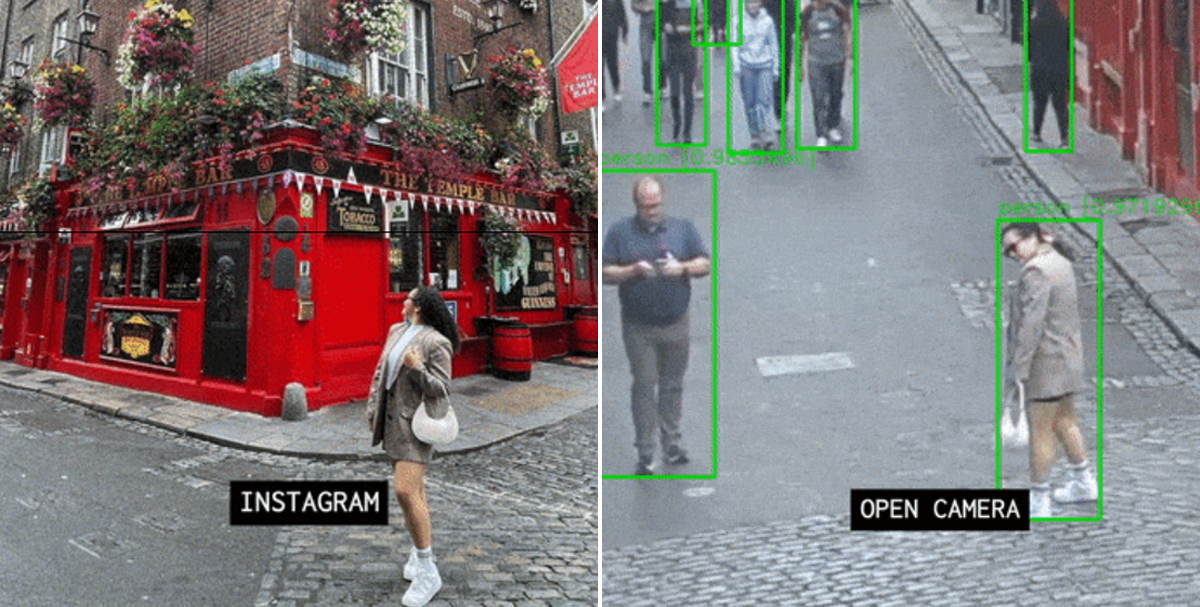 A new art project that taps into open source cameras at popular landmarks reveals what goes into the making of a perfect Instagram picture.

The project by Belgian artist Dries Depoorter is called ‘The Follower’ and combines artificial intelligence and open access cameras to capture wannabe influencers in the wild.

Depoorter recorded weeks of footage from open access cameras, which observe public spaces and frequently have livestreams available online for anyone to access. He tapped into cameras that were trained on famous landmarks, including the Temple Bar in Dublin, Times Square in New York etc.

The concept works by recording a selection of open cameras for weeks and then using AI to scan through all Instagram photos tagged with the locations corresponding to the open camera recordings.

A software then compares the Instagram pictures with the recorded footage, giving us a real-time look into the moments leading up to the Instaworthy shot.

Depoorter’s software scans through the recorded footage to find ‘influencers’ or public accounts with more than 100,000 followers and match them with the photo they took in front of the landmark.

The project was launched on September 12 and the first video from the project was released on Monday with footage from just 10 days.

The side-by-side comparisons reveals how much thought and time goes into capturing the perfect shot. The footage revealed the planning that went into several seemingly candid pictures.

‘The idea popped in my head when I watched an open camera and someone was taking pictures for like 30 minutes,’ Depoorter told Vice.

Depoorter is known for creating interactive installations, apps and games around themes like privacy, artificial intelligence, surveillance & social media. He has promised to publish new results from ‘The Follower’ project on his socials.

‘If you check out all my work you can see I show the dangers of new technology,’ Depoorter said. ‘I hope to reach a lot of people of making it really simple. I really don’t like difficult art. I like to keep it really simple. I think I’m part of a new generation of artists that work with technology.’

While the project shows how social media affects our behaviour, the chilling part of it is being surveilled by these open cameras which anyone can access.


MORE : Mad at influencers for showing off their lavish lives during a cost of living crisis? It is kind of their job


MORE : Grandad’s home besieged by influencers who ’caused thousands worth of damage’