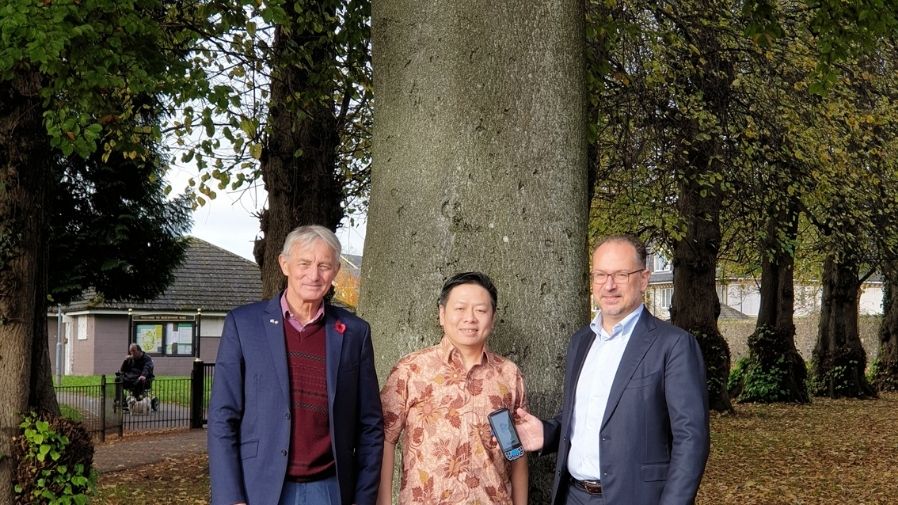 As the age-old saying goes, ‘Great oaks from little acorns grow ’, and on a young tree in Glasgow during COP26 this week, a transformative technology has been unveiled which could have a lasting impact on the future of all the trees on the planet. On the imposing concourse of the City of Glasgow College off Cathedral Street, a Tree Tagging ceremony has been held to demonstrate a new platform which has the potential to build a trusted and verifiable way of measuring and monitoring net zero targets and subsequent progress.

Called the New Energy Matrix, the global ecosystem software allows citizens, institutions such as schools, companies great and small, and government regulators to transparently and fairly post and monitor their carbon footprints and targets.

The tree at the Glasgow college was digitally tagged with an RFID chip which provides a unique identifier, and other information about the tree, including its geolocation, species and current physical dimensions, are loaded immediately into the New Energy Matrix APP to automatically and irrefutably prove its existence and its status.

The technology breakthrough comes at a time when national leaders at the climate summit agreed on a scheme to stop and reverse deforestation, and it reinforces the crucial importance of forests to carbon sequestration and meaningful global climate change accountability. To demonstrate how the technology can be used to identify and monitor mature trees we wish to protect for future generations, the Curtis team has created a new project at Beechwood Park, Stirling. The information for those trees can be found by downloading the New Energy Matrix from the Google Android Playstore or the Apple iOS APPStore.

Jon Curtis, CEO of Isle of Man-based data management group Curtis & Associates, which has developed the platform, said: “There are many ways to measure both individual and corporate carbon footprints, but there exists today no common store for that information. This makes it difficult to analyse how well organisations are doing in reaching their declared targets and whether or not they are indulging any form of deliberate ‘greenwashing’, or offsetting their emissions without evidence or proof. Bringing all the data into a common repository, which cannot be altered once it is verified, means that it can be scrutinised and analysed to ensure fair play across the monitoring of stated targets, not just in forestry, but in all business sectors.”

Curtis & Associates Group has already implemented the New Energy Matrix tagging of trees at GoldTeak, one of its ethical agro-forestry projects in Indonesia, where it has planted more than 30,000 trees which, to date, have sequestered 16,000 tons of carbon dioxide equivalent.

As part of the group’s long-term Corporate and Social Responsibility commitments, it has also funded the rebuilding of the local school and mosque to benefit the local community in the Goldteak location. Curtis said: “Following some very valuable personal interactions with political figures and business leaders at COP26, we have had many enquiries from companies which want to invest in similar Environmental, Social and Governance (ESG) projects and, indeed, want to visit our plantation to see how it is done.”

The unique validation process within New Energy Matrix’s decentralised ecosystem platform guarantees that there cannot be any double counting of net zero efficiencies, and thereby also disincentivises the temptation of unscrupulous greenwashing. Curtis emphasised that sequestration accountability was of primary importance to governments and financial institutions, which need to be sure that the green finance they are disbursing is going to real projects.

The transparent nature of the ecosystem means that peer pressure within sectors encourages mutual validation. The New Energy Matrix will enable the creation of Green Ecosystem Certificates of Known Origin (GECKOs). These verified and immutable certificates can be not only to the storage of sequestered carbon in the forestry sector, but also applied to any other industry on a global basis.

SMEs, the engine room of economy

As one of the select group of companies chosen to present at COP26 through Climate Chambers events, Curtis & Associates was able demonstrate how the system can also be used by individuals as well as companies to post voluntary carbon footprints and net zero targets. However, Curtis said that he and other business attendees were disappointed that SMEs, which make up 99% of private sector businesses in the UK, were denied access to the Blue Zone at COP26, while large businesses, activists and political figures had a free run.

He said: “SMEs are the engine room of the economy and to deny them the chance to interact with decision-makers at an event of this nature can only be described as counter-productive. I was also surprised that the British Chambers of Commerce prohibited media attendance at presentations made by invited companies, ostensibly in case of disruption by activists. Surely the point of events such as this is that, if people have questions, you are there to explain, or rebut their arguments.”