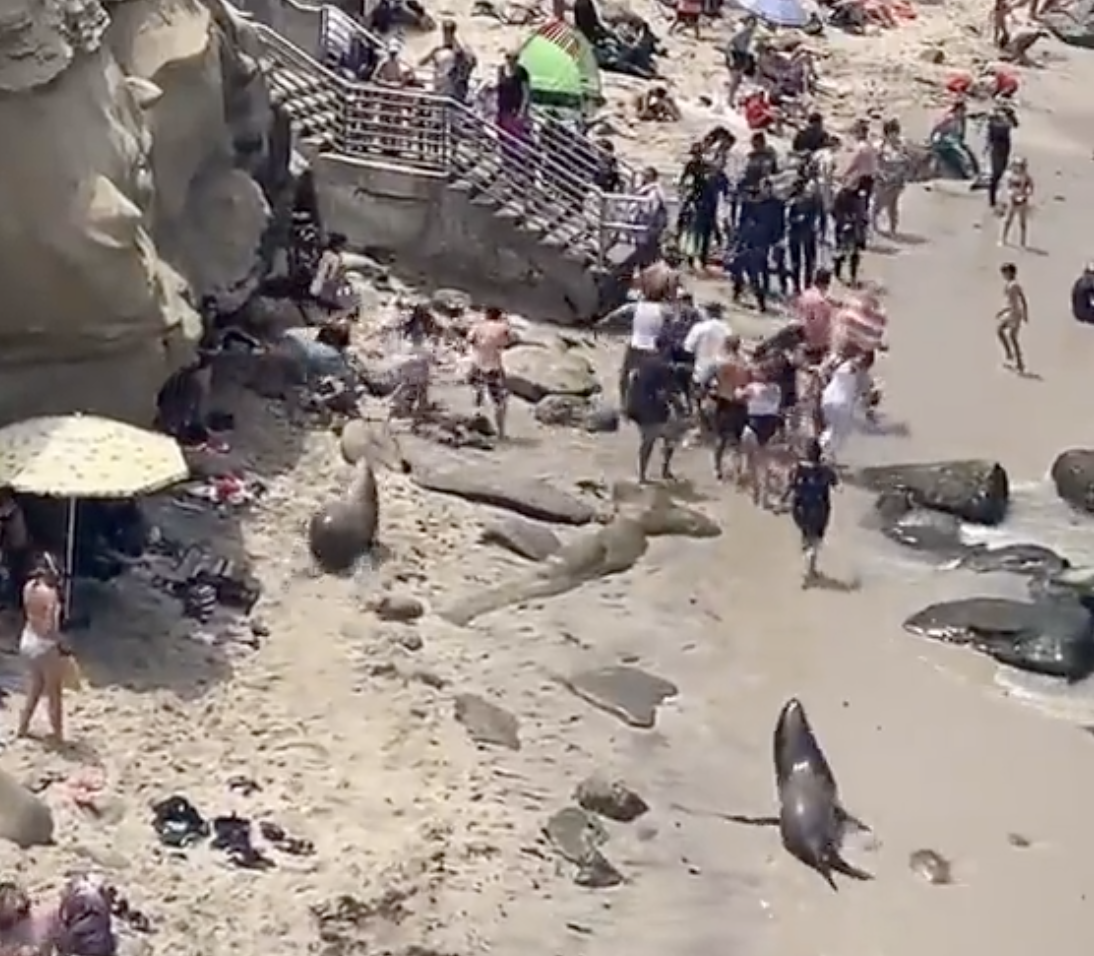 A Vancouver Island couple got more than they bargained for when they stopped their boat to watch a pod of transient orcas feeding on Monday — and the whole thing was caught on camera.

Ernest Godek and his wife were returning form an outing in their 14-foot aluminum boat when they spotted the whales near the mouth of Petter Bay and turned the motor off to watch.

“Before we knew it we realized they were zooming in towards us,” Godek told Global News. “We were like, “Oh no, do we leave or do we stay?’”

The couple opted to sit tight, and as the pod approached, they whales took a deep dive and disappeared from view.

“All of a sudden there was this huge thud on the bottom of our boat from underneath,” he said. “My wife just hit the floor. She was so scared. It was a very scary moment.”

1:47
Young sea lion climbs aboard and goes for ride on B.C. fishing boat

While the couple initially suspected they’d been bumped by one of the whales, it turned out not to be the case.

“There was this huge sea lion peeking out on the side of the boat,” he said. “It looked like it was frightened, in distress, but it was so big that it frightened us as well.”

The next thing Godek knew, the massive sea mammal was trying to get into his boat.

“The boat just wasn’t big enough for it. The boat just starts filling with water, and there’s this huge head next to mine looking at me. I think we both had our mouths open.”

As this was happening, Mark Malleson was leading a nearby tour with Prince of Whales Whale Watching.

“It did one attempt to get in, and I mentioned, ‘You might want to get out of there,’ and they started moving away and then it did another leap on their boat,” he Malleson said.

“And it flipped it right up, I though they’d capsized, miraculously the boat re-righted, the sea lion ended up back in the water, and they stayed in the boat.”

After the second attempt, Godek and his wife kicked their boat into high gear and sped back to shore.

Fisheries and Oceans Canada marine mammal researcher Jared Towers said the frightened animal, which he identified as a California Sea Lion, was likely trying to escape the orcas, believing it was their next meal.

“Over the years there’s been a few photographed encounters of harbour seals and sea lions, Steller sea lions in particular, taking refuge on a nearby boat when they’re  being hunted, and this was a dramatic example of that,” he said.

“When they’re hunting pinnipeds in particular, one of the things pinnipeds do to avoid predation is to get on land or get on anything nearby that can assist them in getting in the water, so a boat is something they’ll take advantage of if they’re getting hunted form time to time.”

Towers said the close encounter is a good example of why it’s important to follow federal regulations that require boaters to keep 400 metres from orcas.

He said even though the couple appeared to be sticking to the regulations — killing their engine when they saw the whales — it’s also a reminder that the ocean is a dangerous environment and boaters need to have situational awareness at all times.

Godek and his wife, he added, were lucky to escape without injury.

“You can see how the sea lion is about to land on the lady in the boat and it sure did come close. She’s very lucky, they’re both very lucky,” he said.

“It could have been a lot worse.”

Malleson said he followed Godek back to the marina, and followed up with him to make sure he was OK.

“They were happy to get back to shore, put on some dry clothes and change their underwear,” he laughed.

Godek told Global News that he and his wife came through the close call unhurt, but were shaken by the experience

“This is a really close encounter, but also one to remember forever,” he said.