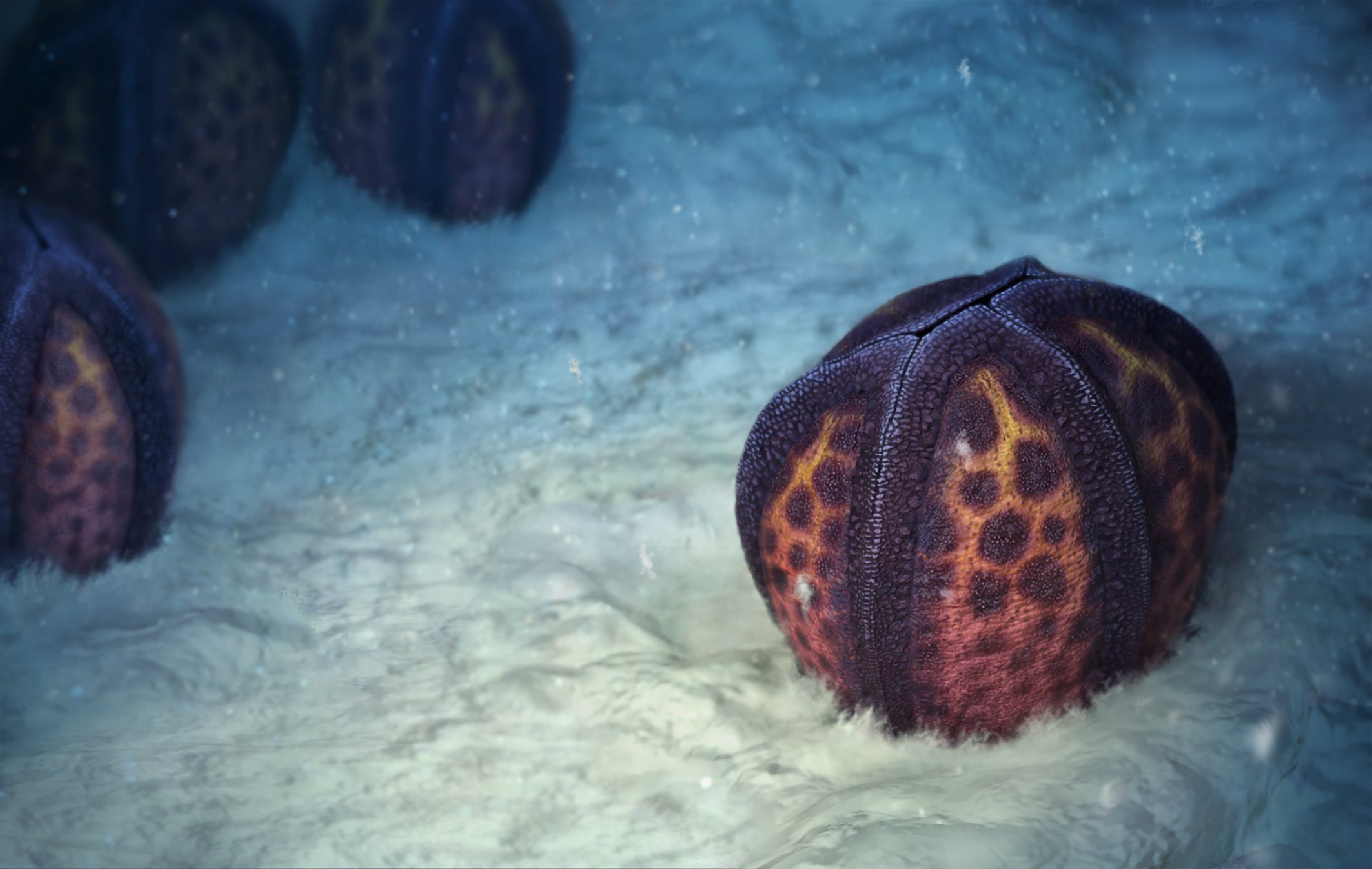 A 510-million year old ancestor of modern starfish and sea urchins has been unearthed…in a churchyard.

It lived at the bottom of the ocean at a time when most major animal groups first appear in the fossil record.

The remarkable discovery sheds fresh light on the evolution of life, say scientists.

The weird creature would have been multicoloured – possibly orange, black and blue – and was about the size of a golf ball.

It has been named Yorkicystis haefneri – after amateur palaeontologist Chris Haefner.

He was looking for extinct marine arthropods called trilobites in the grounds of City View Church in York, Pennsylvania.

Mr Haefner, president of the Lancaster County Fossil and Mineral Club, said: ‘I spent just over four years digging pocket holes in the grass to locate fossils in the church yard.

‘Lenses with fossils are everywhere there. When I found Yorkicystis, I didn’t know its relevance, but I knew it was worth keeping.

‘The City View Church site is 90% undiscovered and who knows what is still hidden there.’

Unlike today’s relatives, Yorkicystis did not have a skeleton. Only the arms were mineralised – protecting delicate feeding structures from damage.

It belonged to a diverse group called echinoderms – which also include sea cucumbers.

Yorkicystis had a disc-shaped body with five arms and a mouth in the centre.

It is unique in being partly soft bodied instead of having a hard skeleton made of calcium carbonate.

The phenomenon represents a rare case of ‘evolutionary loss’, explained the international team.

Lead author Dr Samuel Zamora, of the Spanish Research Council, Madrid, said: ‘This is a major discovery with important implications for understanding the history of echinoderms, the animal group that includes starfish, sea urchins, brittle stars and their relatives.

‘Yorkicystis represents the oldest example of an echinoderm that has secondarily reduced the skeleton.

‘We were surprised to see this had happened so close to the origins of the group over half a billion years ago.’

Yorkicystis comes from a period of time called the ‘Cambrian Explosion’ when an abundance of different species began emerging in the seas.

Co-author Dr Jeffrey Thompson, of London’s Natural History Museum, said: ‘By studying the genes involved in the formation of the skeleton in modern echinoderms, we can make predictions about skeletal development in Yorkicystis.

‘For example, we think many of the genes that build the skeleton in modern echinoderms probably were not expressed in the soft-bodied portions of the animal.

‘It is really exciting to be able to explore the development of an animal that lived over half a billion years ago.’

Yorkicystis was rounded in shape with a diameter of less than two inches.

It would have been an omnivore, using its arms to capture floating food particles from both plants and animals.

Co-author Dr Imran Rahman, also from the Natural History Museum, said:
‘The Cambrian explosion was one of the most significant events in the history of life.

‘A key innovation at this time was the evolution of a hard mineralised skeleton, which helped protect early animals from possible predators.

‘The reasons why Yorkicystis reduced its skeleton at this time are unclear, but it might have helped conserve energy for other metabolic processes.’

It only came to the attention of scientists thanks to the efforts of Mr Haefner – who shared pictures on Facebook.

Dr Zamora saw the photographs and contacted him – explaining the significance.

Mr Haefner kindly agreed to donate the specimen to the Natural History Museum, so it could be analysed.

In recognition, the scientists dedicated the species to him and the new family and genus to the city of York in southern Pennsylvania.

Yorkicystis is described in the journal Proceedings of the Royal Society B.


MORE : Incredible Roman mosaic found near the Shard is ‘once in a lifetime’ discovery